On June 7/8 2018, an international workshop at the Cluster of Excellence “Normative Orders”, organized by Felix Anderl, Christopher Daase, Nicole Deitelhoff, Viktor Kempf, Jannik Pfister and Philip Wallmeier, will bring together a variety of perspectives from International Relations and Contentious Politics to discuss the relationship of rule and resistance in times of transnationalization. Titled “The Transnationalization of Rule and Resistance”, the workshop will be organized along three types of resistance beyond the nation-state: contestation, escalation, and exit, and feature the following presentations (download the program as PDF):

Ferdinand Stenglein (Münster)
“Deserting with Ourselves: The Radical Pedagogy of the Commune”

If you are interested, please write to info [at] dissidenz.net.

Ayşe Zarakol (Cambridge) will give a public talk about her new book Hierarchies in World Politics on December 18th, 06.00 p.m. at the Geothe University Frankfurt. It will be held in English at the Campus Westend, Seminarhaus room 5.101.

Please find below a short summary of the topic and some information about the author.

This is a book talk based on Hierarchies in World Politics (Cambridge University Press, 2017). Globalizing processes are gathering increased attention for complicating the nature of political boundaries, authority and sovereignty. Recent examples of global financial and political turmoil have also created a sense of unease about the durability of the modern international order and the ability of our existing theoretical frameworks to explain system dynamics. In light of the inadequacies of traditional international relations (IR) theories in explaining the contemporary global context, a growing range of scholars have been seeking to make sense of world politics through an analytical focus on hierarchies instead. Until now, the explanatory potential of such research agendas and their implications for the discipline went unrecognized, partly due to the fragmented nature of the IR field. To address this gap, this ground-breaking book brings leading IR scholars together in a conversation on hierarchy and thus moves the discipline in a direction better equipped to deal with the challenges of the twenty-first century.

Rahel Jaeggi, Professor for Practical Philosophy, Philosophy of Law and Social Philosophy at Humboldt University Berlin will give a lecture next Friday, 3 March, at 7pm on “Crisis and Conflict. Active and Passive Dimensions of Social Change” as part of our conference  “International Dissidence. Rule and Resistance in a Globalized World”. The lecture is public and will be followed by a small reception. It will take place in the Hörsaalzentrum, Westend, Auditorium (HZ) 5. 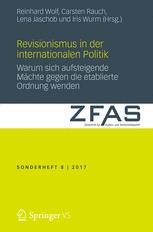 The results of our Resarch Project 4 “Rising, successful, dissatisfied – On the conditions of great power dissidence” (directed by Reinhard Wolf), have just been published in a Special Issue of the German journal Zeitschrift für Sicherheitpolitik titled “Revisionism in International Politics”. In the Special Issue, contributions by Lena Jaschob, Carsten Rauch, Iris Wurm, Johannes Sauerland and of course Reinhard Wolf discuss why rising powers resist the established order.

From 2-4 March, we organize a conference on “Rule and Resistance in a Globalized World” at Goethe University Frankfurt.

The conference focuses on the dynamic relationship of rule and dissidence. In 14 panels and one round table different themes will be discussed:

To register for the conference please wirte an email with your affiliation to conference [at] dissidenz [dot] net until February 1st.

Maik Fielitz, associated researcher at the “International Dissidence” research group, and Laura Lotte Laloire have edited a volume on the extreme right in Europe. The volume, titled Trouble on the Far Right. Contemporary Right-Wing Strategies and Practices in Europe is just out with transcript. In Europe, the far right is gaining momentum on the streets and in parliaments. By taking a close look at contemporary practices and strategies of far-right actors, the present volume explores this right-ward shift of European publics and politics. It assembles analyses of changing mobilization patterns and their effects on the local, national and transnational level. International experts scrutinize new forms of coalition building, mainstreaming and transnationalization tendencies as aspects of diversified far-right politics in Europe.

Click here to find out more about the book.

Over the coming weeks, a blog series on social movements and institutions edited by Felix Anderl (from the Alterglobalization project), Jannis Julien Grimm (FU Berlin) and Jan-Philipp Vatthauer (HSFK) will be published on the leading German IR blog Bretterblog (in English language).

„Some Vantage Points for Rethinking Movements and Institutions: Introduction to a Blog Series

Social movements and institutions are central actors in national and transnational politics as well as core categories of social inquiry. Despite their importance, both terms are still haunted by a lack of thorough definitions. We introduce a blog series with ten weekly contributions on their interrelation, outlining several innovative approaches and suggesting some vantage points for rethinking ‘Movements’ and ‘Institutions’ in a productive manner.“

Read on here or visit the IPB’s Working Group on Social Movements and Institutions.

We are looking for contributions for our upcoming conference on “Rule and Resistance in a Globalized World” (2-4 March 2017), where we plan to address the the relationship between resistance and systems of rule in times of transnationalization.

You can find the full call here.

We are looking forward to receiving your abstracts until 1 June 2016!

In the first week of May the Chair of International Relations and Theories of Global Orders, in cooperation with Asienhaus, Urgewald the Institute for Social Movement Studies (IPB), hosts three events to accompany the annual meeting of the Asian Development Bank (ADB) that takes place in Frankurt this year.

On Tuesday, the 3rd of May at 5pm, there will be a lecture by Aram Ziai (Kassel, Germany) on “Can the subaltern file claims? The World BAnk Inspection Panel from a postcolonial perspective”.

The same evening at 7pm, Titi Soentoro (AKSI, Indonesia), Rayyan Hassan (NGO Forum on ADB, Philippines) and Chris Lang (REDDMonitor/Asienhaus) will present the impact of ADB-projects in the contexts of gender, rights and environment.

On Friday, the 6th of May there will be a day-long workshop by the IPB’s Working Group on Movements and Institutions on the interaction of social movmements with international organizations. For this workshop we ask you to please register under anderl@soz.uni-frankurt.de.

Workshop “The Transnationalization of Rule and Resistance”

5. December 2017
Ayşe Zarakol (Cambridge) will give a public talk about her new book Hierarchies in World Politics... mehr»

3. February 2017
The results of our Resarch Project 4 “Rising, successful, dissatisfied – On the conditions... mehr»